The Not-So-Lonely-Planet Guide to entertaining kids in Port Elizabeth.

by missmelissawrites on June 29, 2015 in thinking, traveling • 0 Comments

Your initial worry might be whether you will survive the budget flight to Port Elizabeth to visit Gran, but once you do, with kids in tow, your real and actual concern looms: What Will We Do?

But its fine. I’ve got it sorted.There’s a ream of stuff to entertain the under tens in Port Elizabeth. And the bonus is that Orange really is the new Black. You will only need to pack a R200 note.

My own two ladies are under ten so these are tried and tested outings. Also, please bear in mind, these ladies of mine have been to four of the seven continents, and have attended about six different schools. (I’ve lost count, I think we overdid the moving thing.) They are tough to surprise.

Its R30 per child, and consists of a Minion-Rush-addicts-concentration-span-sized game drive, complete with well signed dirt roads and bright animal information boards. My offspring screeched with delight when they saw buck, zebra and giraffe close up. We were allowed to stroll, self-guided, around the predator enclosures, which was a delectably ominous experience. The wind whistled through the trees, no one else was around and the man eaters flicked their tails. The tension was palpable. If you go on a Sunday you can watch the lions eat. They are kind of smelly when they’re not feeding so I’m guessing you may need a hankie for your nose on munch day. Wild Encounters (i.e. cub cuddles) cost extra but are not guaranteed.

If the U10’s get hangry on the way back, you could stop off at the Grass Roof bakery,deli and restaurant (with play area). It checks all the Southern Suburbs boxes: its green, both in colour and in ideology; it has a Farm Stall stocking Organic produce and, wait for it; you can buy Banting Bread.

7 Castle Hill
I know y’all who grew up there are going pffft, but these girls of mine were delighted. Yes, you may feel the need to don a Kevlar vest as you exit your vehicle in a neighbourhood that is in deep decay, but once you get inside this 1820 Settler Cottage, prepare to be enchanted.

We were the only visitors at the time. The curator gave the girls a scavenger hunt-like list of items peculiar to the 19th century life into which we were peering. They dashed around checking off the list. There is a toy room upstairs, in which they reveled, and a kitchen basement that I’m thrilled is out of style, but the big winner was the working well in the yard. The ladies pumped water and recycled it for a very long time.
The real bonus, of course, was felt in my purse. The entry is R5 . Uh huh. R5

The only thing available in Cape Town for R5 is the synthetic tasting ice-cream from the pie shop in Blue Route Mall.

Your next stop is a mere five minutes away on the Donkin Reserve. I paid R80 each to see Tutenkamhun replicas in Cape Town. Prepare to pay nothing to see A Real Pyramid. Throw in a lighthouse and the second biggest flag in the whole wide world of Africa and you have another winner. While the kids run around, the romantic in you can read the words on the pyramid and have a The Notebook Moment. It’s like Nicholas Sparks went back to 1818 except it’s Sir Rufane Donkin’s tribute to his 28 year old wife, who died of a fever in India.

of one of the most perfect

who has given her name

to the Town below

Has anyone written such stuff for you? Me neither. (But then I’ve not yet succumbed to malaria.)

Next, get those boots on and head down the hill, also known as errm, White’s Road, past the Opera House, where you will knowledgeably point out the oldest theatre in the Southern Hemisphere.

As you keep going on down the hill, you may think you need a bodyguard like this.

But chances are you’ll be fine.

Tell the U10’s to look at the grumpy statue of Queen Victoria while they still can, and then, take them into the Main Library.

Inside is a child’s dream come true, the stuff of Nanny Mc Phee and the Spiderwick Chronicles, there’s stained glass, elevated walkways, a domed ceiling, balconies and so many books. Set them and their imagination free.

Then, since you’re feeling so rich, having spent, um what was it? Oh yes. R5. You might as well stop for dinner at The Stage Door

It’s on Chapel Street, in the Phoenix Hotel, near the actual stage door of the Oldest Theatre in the Southern Hemisphere. The menu and vibe are legendary.

Not counting food, you have only spent R35 each on those kiddies, and it’s Day 3. Feel free to go big. Head on down to the beachfront and start at Bayworld. Here you will need to dig deep and part with another R30 per child. That’s a bargain compared with other aquatic establishments. True, these exhibits are less extraordinary. However, the veterans of Two Trips to Sea World , a visit to the San Diego Aquarium , the AQWA, the Aquarium of South Carolina and the Two Oceans Aquarium were not underwhelmed. They cheered on the seals and the penguins, they were enchanted by a boa constrictor in the Snake Park and they judged it altogether a delightful outing. There were no comments or comparisons to other trips they had taken, they lived in the moment.

In other news, if you grew up in PE in the 70’s/80’s like me, then a trip into the museum is like Back to the Future without the DeLorean and the Plutonium Flux Capacitor. The old Algoa Bay whale bones are a-rattlin’ in the ceiling, the lofty dinosaur presides over the double volume nearby and the vinylesque floor tiles remain the same. The marlin is on the wall, and the little stuffed butcher bird still has its prey on a twig in the glass cabinet upstairs. (Yes. I was scarred by that.)

Bayworld is a greatly reduced place and it’s easy to harp on about the good old days, but through the eyes of children, children who have seen a lot, it was fresh and it was a delight. Sometimes it’s the simple things, people.

On your way home, detour to Pollock Beach and stop at Something Good
for a real roadhouse experience. If you are sticking to your EC budget, pull up in the lot and order a milk shake for each child from the guy who comes to the car window. It will be another Back to The Future moment. 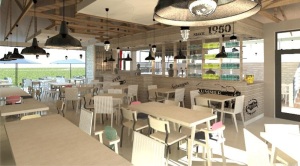 If you’re still hanging with that bodyguard 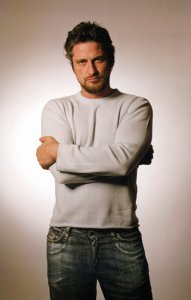 you may want to hang around for this bodyguard pleasing fare.

The Twilight Zone Tower of Terror in The California Adventure Park, Disneyland terrified these U10’s to such an extent that the rides at The Boardwalk are just fine if you are prepared to spend another R30. There is a carousel, a shooting star and jets for the real tiny people. They open at 15h00 on a Friday and remain open on the weekend. You could stroll down to the Verandah at the Beach Hotel for a light dinner with a beautiful sea view. The U10’s will feel posh and important when you buy them a virgin Shirley Temple off the extensive cocktail menu.

Then you can head back to the Boardwalk for the 19h00 Musical Fountains.

So there it is. Four Days worth of outings in Port Elizabeth with your kids, Gran and a R200 note.

Really though, there are zillions of other things you could do in PE. There’s Sardinia Bay, Kragga Kamma Game Park, Addo, The Sacramento Trail, I could go on. Sometimes, in pursuit of greener pastures we overlook the lush meadow we’re in.

So on the fifth day I suggest doing something for yourself. Take them to the park. Put the two of them on one side of the see-saw and put yourself on the other. Go up and down about fifty times. The work rate is directly proportional to squats. Then, you can forget Kayla and her Bikini Body in 12 weeks. You will be ready. You will have fast tracked. An hour on that see-saw is like three months of Kayla torture. True, you won’t walk for the rest of the time you are in PE but you will look great, albeit supine, in your bikini. Your thighs and butt will have learned what has likely up until this point, been Victoria’s secret.

← When motherhood is elusive: What you need to survive IVF
The Reluctant Entrepreneur: 13 Things I Learned in Small Business →