Why do I know the words to The Beach Boys songs? It’s more likely that I would know Karma Chameleon and With or Without You. Or  Dancing in the Dark. But The Beach Boys lyrics came back to me when I watched the movie Love and Mercy . It’s a biopic of the lead singer/songwriter, Brian Wilson. I remembered those…

by missmelissawrites on January 26, 2016 in thinking, traveling • 0 Comments

These are some of the birds around the Kromme River,  the estuary that empties into St Francis Bay. It is a small, but fiercely protected, piece of unspoiled ecology.

Early morning trail runs through the farmlands on the Paradise Beach side end as you come down over the dunes. You weave through grasses and succulents onto the beach. The cicadas are loud. The sun rises over the sea, scattering its sequins around pods of dolphins.

It is an estuary so clear, aquarium like, as you stand up paddle along it’s banks. The ripples formed by the current on the sand of the river floor are visible in the sunlight.

The river banks on the farm side are edged with stone, black mud and reeds. The reeds are alive with creatures, birds, and mud prawns.

From the cove at the mouth around to the St Francis side, and into the canals, the river banks are of golden sand, home to hermit crabs, pencil bait and blood worm. The tides wash over these banks, refreshing, warming, soothing. The ebb and flow is the rhythm of its life.

In late December another rhythm comes to town.  It marches to the beat of New Year’s Eve. St Francis Bay becomes the magnet of revelers.

The village air is thick with muscle vests and testosterone. Salons are full. Midriffs are exposed. Beers, girls, money, tickets.

Midnight. Fireworks. But the party can’t drown out the sound of the surf.

We went stand up paddle boarding. The river sparkled. Or so we thought, until we paddled into the channel. Everywhere we turned were sad, spent balloons. Purple balloons, pink balloons, yellow, green, white, blue, orange,red.  Like a plastic jet stream. Tangled in the reeds, washed up on the sandy shores, in the canals, taking rides on the tide out to sea.

We knelt on our paddle boards to fish them out. We gathered strays, we gathered clumps. Our children and our neighbours’s children scoured the sand at the cove, collecting hatfuls, bucketfuls, but we couldn’t get them all. 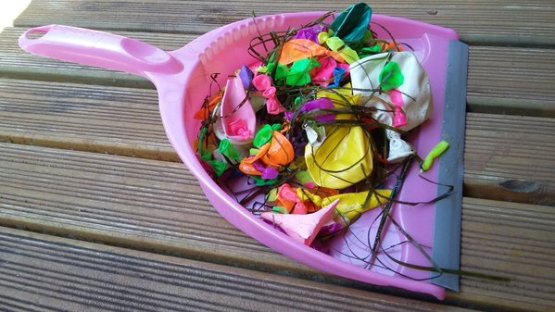 One of the New Year’s Eve celebrations in the St Francis Canals is a water fight. There are boats and crafts and people on jetties. However, a weighty sector of the ammunition is water-filled balloons.

The Canals at St Francis are not the home of the disadvantaged. They are a place of privilege. A retreat of the wealthy, the fortunate, those who benefit from education and financial stability.  Surely with such great privilege comes greater responsibility?

Have we, the privileged, become so sad that we will party at such great cost?

I’m not suggesting becoming the Grinch who Stole New Year, but rather reflection on the following facts:

If we keep on welcoming a new year with unsustainable celebrations, it might be one less new year on the greater calendar.